Bentonite clay is composed dominantly of the clay mineral smectite. Its physical properties and characteristics are dictated by this clay mineral (Wright, 1968). In the majority of cases, bentonites are formed by the alteration of volcanic ash and rocks after intense contact to water.

The most important property of smectite clay minerals is the behaviour in contact with water. The weak layer charge allows the interlayer cations to adsorb water molecules to form a hydration shell. This inner-crystalline swelling can be observed by an increase in volume of the clay minerals which can be many times the original volume. Monovalent cations present, such as Na-ions in the interlayer space of the minerals, can hydrate to the extent that individual platelets are separated from each other. The colloidal properties of such dispersions are controlled by the electrical forces generated within the clay mineral platelets and any dissolved and adsorbed electrolytes. In a fully exfoliated state the specific surface area of smectite minerals can be as high as 750m²/g. Free swelling, the resulting high surface area and a negative layer charge provide desired gelling and sealing properties, binding behaviour, and preferred adsorption of cationic molecules.

Bentonites having a dominant occupation of sodium ions in the natural state are rare and are isolated to specific global locations, e.g. Wyoming in the USA, compared to the more abundant Ca-/Mg-bentonites. Ca-/Mg- bentonites have the ability to be modified by exchanging the divalent Ca-/Mg- cations with Na-ions by treatment with soda ash. During treatment Ca and Mg is precipitated after being replaced by Na-ions from the readily soluble Na-carbonate. After modification, these bentonites behave as Na bentonites with high swelling and gelling behaviour. 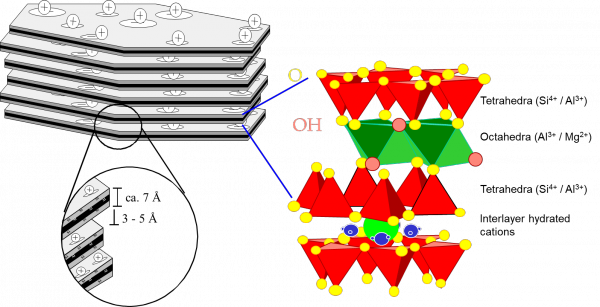 Bentonite is considered as the “mineral” with 1,000 uses. Initially used in the oil and water drilling industry as a mud constituent where it is used to seal borehole walls, remove cuttings and provide lubrication to the cutting head. In similar applications it is used in civil engineering as thixotropic support and lubricant for diaphragm walls, foundations, tunnelling operations, horizontal directional drilling (HDD) and pipe jacking. The electrostatic stabilized dispersion of smectite minerals shows plastic flow behaviour creating a shear strength which is able to support loads from the surrounding soil. Due to the swelling and adsorption properties of bentonites they are used in sealing and capping applications to prevent water circulation and diffusion of hazardous constituents. The viscosity and plasticity of bentonite is used in mortars and plasters to improve thixotropic and pseudo plastic flow behaviour and give plasticity to ceramic masses.

Bentonite is a critical constituent in the production of castings for the foundry industry where it is used as a binder for the production of moulds. The smectite platelets cover the sand particles and bonding takes place through adhesion and cohesion based on the surface properties of the wet clay platelets attached to the quartz surface. Bentonite binders enable economic and environmentally friendly foundry operations since the majority of the sand and binder is reused in a cyclic system. Prerequisite is a suitable bentonite with stable thermal durability, and at the same time providing efficient shakeout behaviour.

The binding properties of bentonite are utilised for the pelletising of fine iron ore concentrates to be used in blast furnace operations and steel smelting. In the huge consumer market of pet litter materials, clump formation in contact to water makes bentonite ideally suited for this application.

There is a variety of further applications of bentonite in different industries. It is used in the paper industry to improve sieve retention on the paper machine binding impurities as resin conglomerates and in the treatment and purification of process water. During wine production, it removes yeast and proteins and contributes to the stabilization of the wine. The surfaces of the smectite minerals provide a catalytic activity which is used in chemical processes, frequently after further processing of the bentonite (e.g. acid treatment).

Bleaching clays used for the purification of edible oils are bentonites treated with acids where the crystal structure of the smectite clay minerals is partially attacked in order to increase porosity and surface properties. Hydrophobisation of bentonites can be achieved by exchange of organic molecules in the smectite interlayer. Those organoclays are able to swell in nonpolar solvents and are frequently used as a rheological additive in paints and waxes.